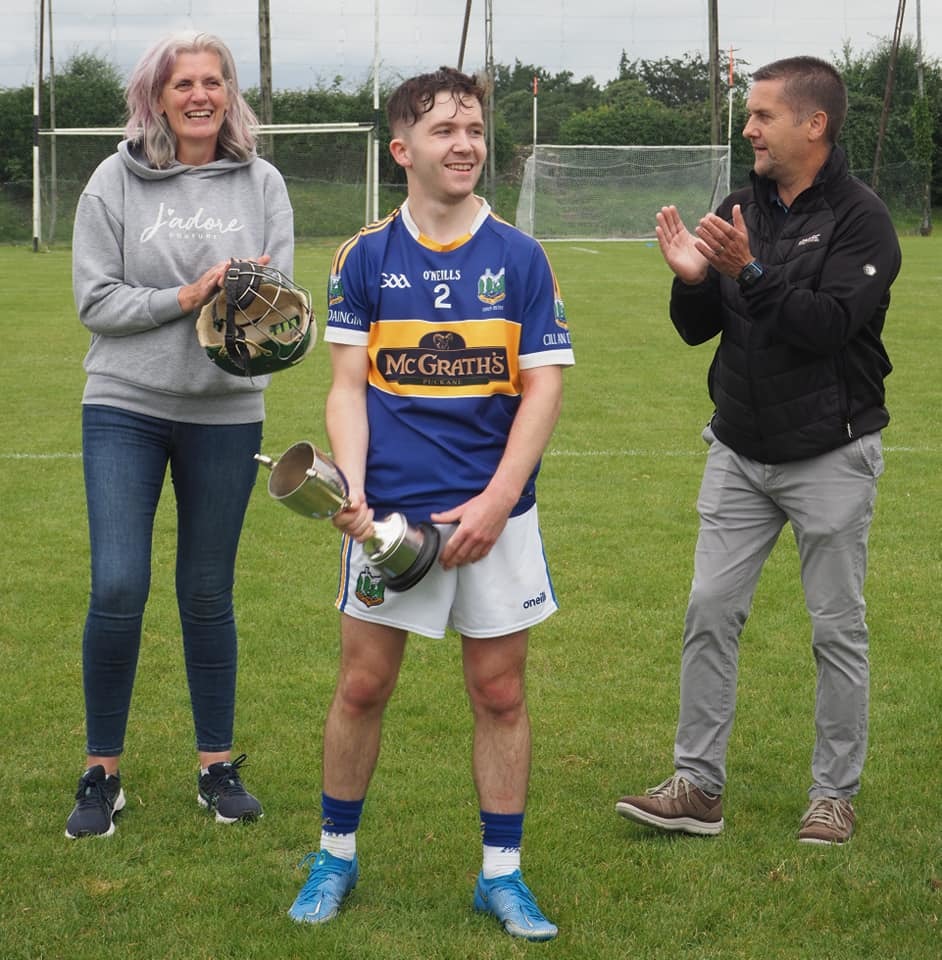 Best of luck to the Senior ‘A’ team as they take on Burgess this Thursday 5th July at 7pm in Dolla in the first round of the North Senior Hurling Championship. This is an all ticket event. Please contact Art Flannery on 086 357 7571 in order to order a ticket. Priority will be given to club members as demand will outweigh supply. Our Senior ‘B’s have a bye in the first round and will be out in action next week in the Quarter Final.

Also, the draw for the County Senior hurling championship fixtures was carried out last week. The Senior ‘A’s will take on Loughmore Castleiney in the first round whilst the Senior ‘B’s will take on Burgess. Both games will take place on the weekend of 28th August.

Congratulations to the Junior ‘B’s who claimed the North League title last Sunday afternoon in Portroe after an exciting game. Final score was Kiladangan 0-20 Silvermines 2-13. It’s great to see the clubs third team going so well. Johnny McGrath was the victorious Kiladangan captain. Congrats to the management team of Eoin Butler, Eamonn Kelly, Mike Ryan Scart and Eddie Fogarty. Team, scorers and score tracker is available on the club website.

Attention now turns to the North Junior ‘B’ championship which commences on the weekend of August 14th where they will take on Nenagh Eire Og in Puckane.

The Under 19 hurlers will take Silvermines in the North ‘A’ Hurling Semi Final this coming Saturday at 7pm in Templederry.

Hard luck to the U17 hurlers who lost out to Kilruane MacDonaghs by 2-12 to 3-12 on Monday 26th. They took on Newport in Newport on Monday 2nd with no result at time of going to print.

The Under 15’s lost out to Burgess last Thursday evening. They are at away to Borrisokane this Thursday 5th at 7pm.

Both Under 13 sides were in hurling action last week. The ‘B’ side defeated Borrisokane on Tuesday whilst the ‘D’s lost out to Nenagh Eire Og on On Tuesday 3rd, the ‘B’ side travelled to Portroe whils the ‘D’ side were also away – taking on Borris Ileigh with no result at time of going to print.

The 2021 Kiladangan GAA Golf Classic proved to be very successful. Many thanks to all those that took part and who contributed to the Tee Box sponsorship and a special thanks to OBI Wealth Management as main sponsors. Many thanks to Nenagh Golf Club for hosting the event also.

Hard luck to the Tipperary senior hurlers who lost out to Waterford in the All Ireland Quarter Final last Saturday.

SeniorBoth Senior sides were out in action last weekend i...

SeniorBoth Senior sides are out in action this coming wee...