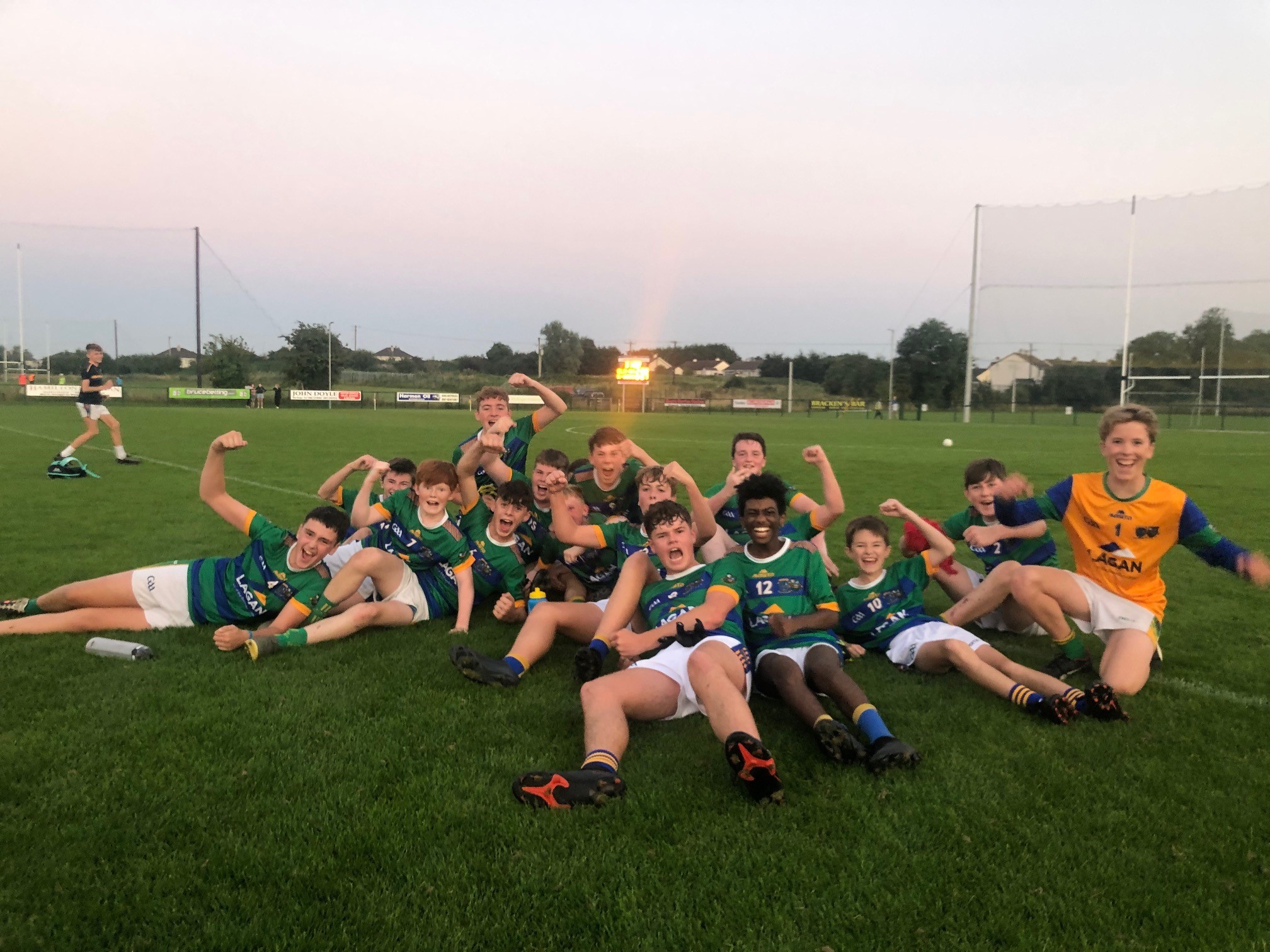 Published: over 1 year ago

They say good things come to those who wait. Well, that’s a cliché which certainly proved true tonight, as the boys of Clonard and Ballinabrackey claimed honours against a talented Kilmainhamwood side in a pulsating final, played in the idyllic conditions and surroundings of St. Finian’s Park.

Both teams qualified for the final with a 100% record in their qualifying games just two days previous in Ballinlough. Our boys claiming a convincing win over Blackhall Gaels and then edging a tight affair against a dogged Ballinlough outfit. The scene was perfectly set for a great final and it didn’t disappoint.

From the throw-in it was obvious to the large support in attendance that the South Meath boys were up for the battle, as they stormed to a 1-2 to no score lead after 10 minutes. A significant foothold considering the short-sided féile format of just 15 minutes per half. The Clonard\Bracks goal came from the penalty spot, sublimely finished by Dean Carroll, who had been fouled on the edge of the small square after receiving a pin-point delivery from Dylan Duignan at midfield. The ball rested in the top corner support, a finish normally seen in the San Siro and not St. Finian's.

It was the aforementioned two boys who also chipped in with the opening two points, “Deano” from a placed ball and Dylan from distance. But the one way traffic was to change direction as the North Meath visitors found their rhythm and started dominating possession. However, they were to get no reward on the scoreboard, which was purely down to superb defending by the home side. On every visit inside the 45 meter line the boys in green and blue closed down space and turned over ball. Paddy Killaly, Aaron Scott, Daragh Browne, and Oisin Walker to name just a few. Model defending on show in all areas of the Clonard half of the field.

But the crucial moment of the first half came in the closing minute when a rare Kilmainhamwood visit close to goal was brilliantly saved by Dylan Kennedy. The ball was bound for the top corner until the young Ballinabrackey man dived high to his right to deflect the ball on to the meeting of the crossbar and post. It was a tremendous save and one which would prove crucial. To add further hurt to the visitors Daniel Johns cancelled out their only score of the half with a nicely taken point of his own. It left the half time scoreboard reading Clonard/Ballinabrackey 1-3 Kilmainhamwood 0-1

The second half followed a different pattern as Kilmainhamwood gained confidence from their majority possession late in the first half and constantly drove at the home side. Their midfield pairing gained a foothold and their talented centre-forward was pulling all the strings. This time their efforts were rewarded as they kicked point after point. It wasn’t all with the visitors though as the home side did get plenty of chances at the opposite end, some falling short to the keepers hands, and two excellent goal opportunities, one which was brilliantly saved by the ‘Wood’ keeper as Dean Carroll looked certain to claim his second major of the evening.

But with the sides level and time up on the clock edging into injury time, there was more drama on the cards. A lung bursting run by that man ‘Deano’ again saw him bear down on goal. He looked to do the intelligent thing as he attempted to fist over the bar from a very tight angle but his effort dropped short and late substitute Jim Kelly used every inch of his near six foot frame to touch the ball in to the net. Cue delirium on the side-lines and home dugout!

Credit to Kilmainhamwood as they won possession again from the kick-out and drove forward looking for goal, and could have had one, only for a last-ditch tackle by full back Niall McHugh. The Clonard man was shown a yellow for his indiscretion and it could have been black, but either way the resultant free was knocked over the bar for another Kilmainhamwood point. The goal-kick was taken and Longwood referee Martin Ennis blew his final whistle, Clonard-Ballinabrackey had done it! Final Score: Clonard/Ballinabrackey 2-3 Kilmainhamwood 0-7

There was an outpouring of emotion from every player in green and blue. These lads have been through the mill over the last few years. Some not getting enough opportunity of football, some suffering heavy defeats, others losing Under 12 and under 14 finals, but today was their day and it clearly showed. They have improved and bonded together as a group with every game this year under the tutorage of Paddy McHugh and Alan Browne. Both players and coaches are very deserving of today’s success. It’s also a wonderful lift and justification for the first amalgamation of the two clubs in almost 20 years. You know what they say about good things…….. 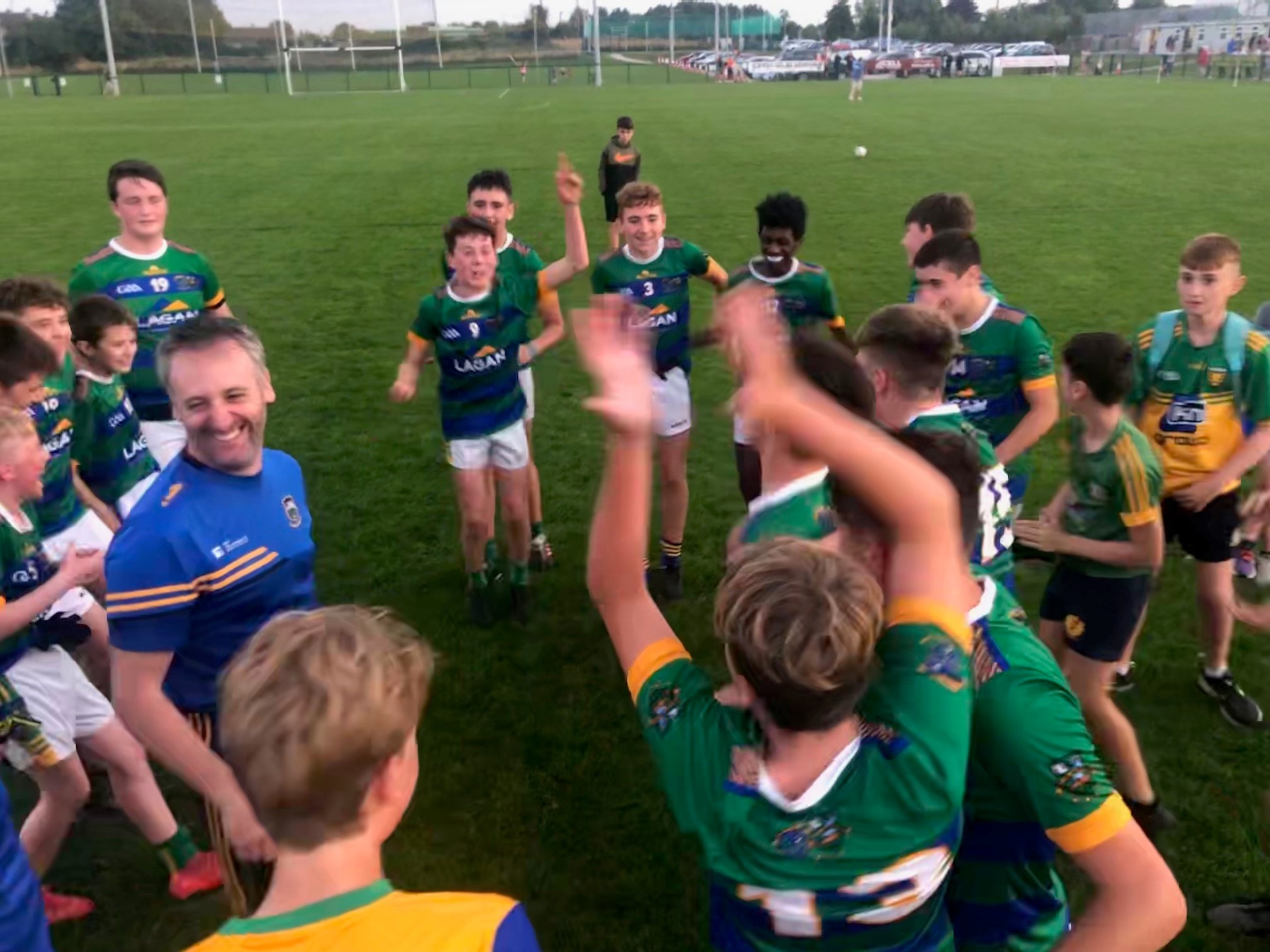