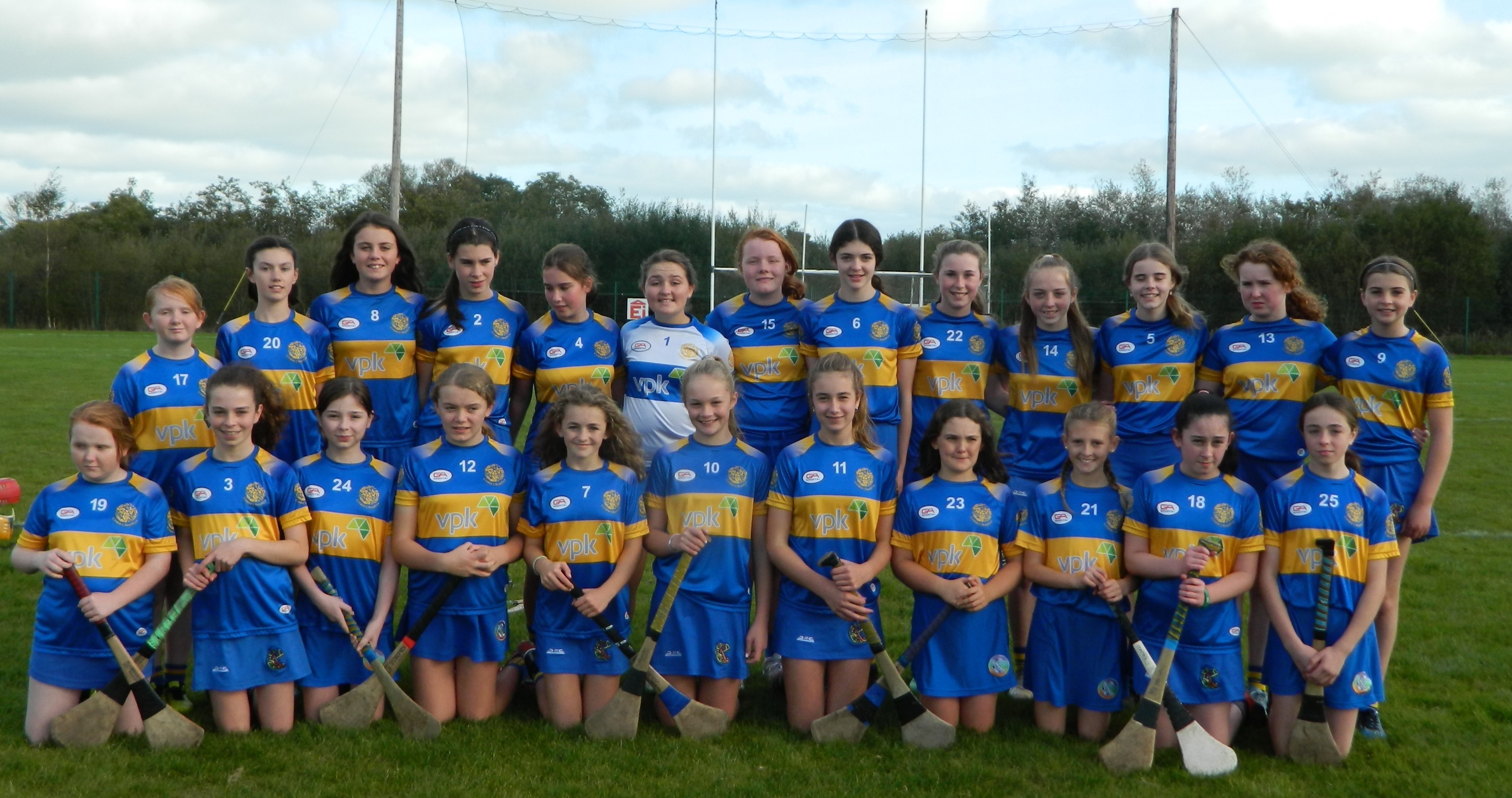 Neighbours Sixmilebridge and Newmarket went into battle on Sunday in the U13A Championship Cup Final, played in glorious sunshine in Fr McNamara Park.

This game was played at an incredible pace with a very high standard of skill on show from both teams.

Aoibhe O Leary opened the scoring for Newmarket with a hard-earned point after nine minutes. Sixmilebridge raised a green flag with thirteen minutes gone, when the ball made its way to the back of the Newmarket net in a goal mouth scramble, must to the delight of the Bridge supporters.

Both goalies Holly Fahy and Sarah O’Grady pulled off vital saves at different stages of the game and both sets of defenders excelled in a game where the ball was constantly raining down on them.

Olivia Darcy found a slight gap in the Bridge defence and goaled for Newmarket with two minutes left in the first half, leaving Newmarket ahead by the minimum at half time.

Community Games puck fada champion Molly Purcell and her team mate Emily Reddan were very much on the attack throughout the game while centre back Heather Henchy was very impressive for Sixmilebridge. Kate Jones, Lily Ryan and Olivia Darcy covered a lot of ground for Newmarket and Áine McGann at full back was rock solid.

Two points from placed balls from Kate Kennedy and Avril Crowe gave Newmarket a bit of breathing space early in the second half and an excellent goal from Aoibhe O’Leary put them six points ahead at the second water break.

Kennedy pointed again from a placed ball in the last quarter as did Purcell for Sixmilebridge but another goal from Joint captain Aoibhe O’Leary sealed the deal for the Blues and crowned them U13 champions.

Joint Captains Amy O’Rourke and Aoibhe O’Leary were thrilled to accept the cup on behalf of their teammates from Clare Camogie Chairperson Joe O’Donnell.

Feakle Killanena had a great win over Broadford in the B  cup Final on Saturday evening. The teams met in the groups stages earlier in the summer with Broadford winning by 5 goals, however, the Feakle Killanena girls and management were focused on ensuring that they were going to fight all the way and this they did with great spirit, teamwork and some brilliant camogie. With great support from the community, the large crowd cheered on the girls from start to finish.

The first quarter was closely contested with both teams scoring a point each. Just after the water break Feakle Killanena scored 3 goals to close the half with a 3-1 to 0-1 advantage.

The second half was very competitive as Broadford came more into the game and scored a goal and a point to narrow the gap. Feakle Killanena added 2 more goals before the final water break. In the remaining 10 mins Broadford added another goal and 2 points. The Feakle Killanena defence and goalkeeper were put under great pressure with some brilliant goalkeeping and defending needed to hold out. The final whistle was greeted with great joy and excitement as Feakle Killanena won out on a scoreline of 7-1 to 2 -4.  A victory tour of the parishes followed with great support from the community.  This group have had a brilliant year and really exceeded expectations, and deserve great credit given that the majority of the team are underage again next year.

A strong first half performance saw Ballyea take the U13B plate honours as spectators were treated to a great display of camogie from both sides.
Ava Custy opened the scoring for Ballyea with a point from play. As both sides battled hard it was 15minutes into the game before the next score was registered with Caoimhne Francis extending  Ballyea lead  with a goal just before the 1st water break.

As play resumed Ballyea had their second goal from Ava Custy. Crusheen found it difficult to break through the Ballyea back line. At half-time the score was 2-1 to 0-0.

Crusheen scored the first two  points of the second half from frees from Ruby Earley. Ballyea responded with a third goal, followed by a pointed free taken by Roisin Coughlan. Crusheen added a third point from Emer Clancy which was the final score of the match.

After the game Clare County board  Chairperson presented the winning trophy to Ballyea’s Captain Neasa Meaney.

Éire Óg overcame a three-point half time deficit to take the honours in the under 13 C Cup Final on Saturday at Shannon Camogie pitch.

Unerring accuracy in their first half shooting saw Parteen score three points at each side of the water break while Éire Óg were guilty of being wide of the mark on four occasions. The Townies were thrown a lifeline just after the first water break, however, as a goalmouth scramble saw Aoife Keane get the final touch to send the ball to the back of the Parteen net leaving the half time score at 6 points to 1 goal.

Parteen were first off the mark in the second half with a well taken point, stretching their lead to four points. A real battle for possession ensued which culminated in Éire Óg captain, Ciara Hickey gathering the ball and striking for goal to leave the minimum between the sides. Parteen rallied and raised two white flags putting them well into the ascendancy, but Éire Óg battled on and got their reward as a superb Aoife Keane goal levelled matters with just four minutes left on the clock. With less than on the clock, it looked as if this encounter would be going to extra time, but in a frantic finish, Éire Óg dug deep and Ciara Hickey raised her second green flag to snatch a last-minute victory. 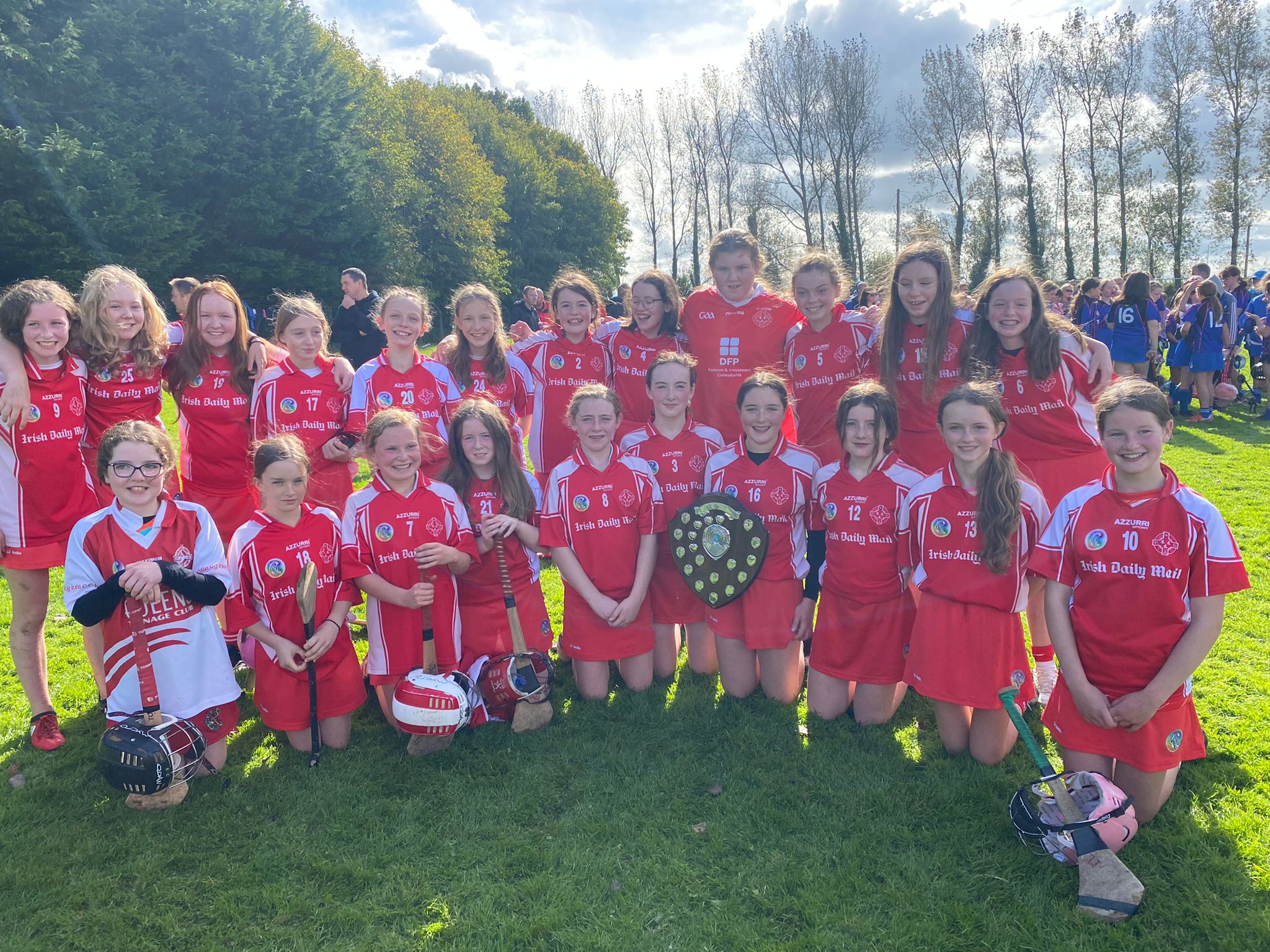 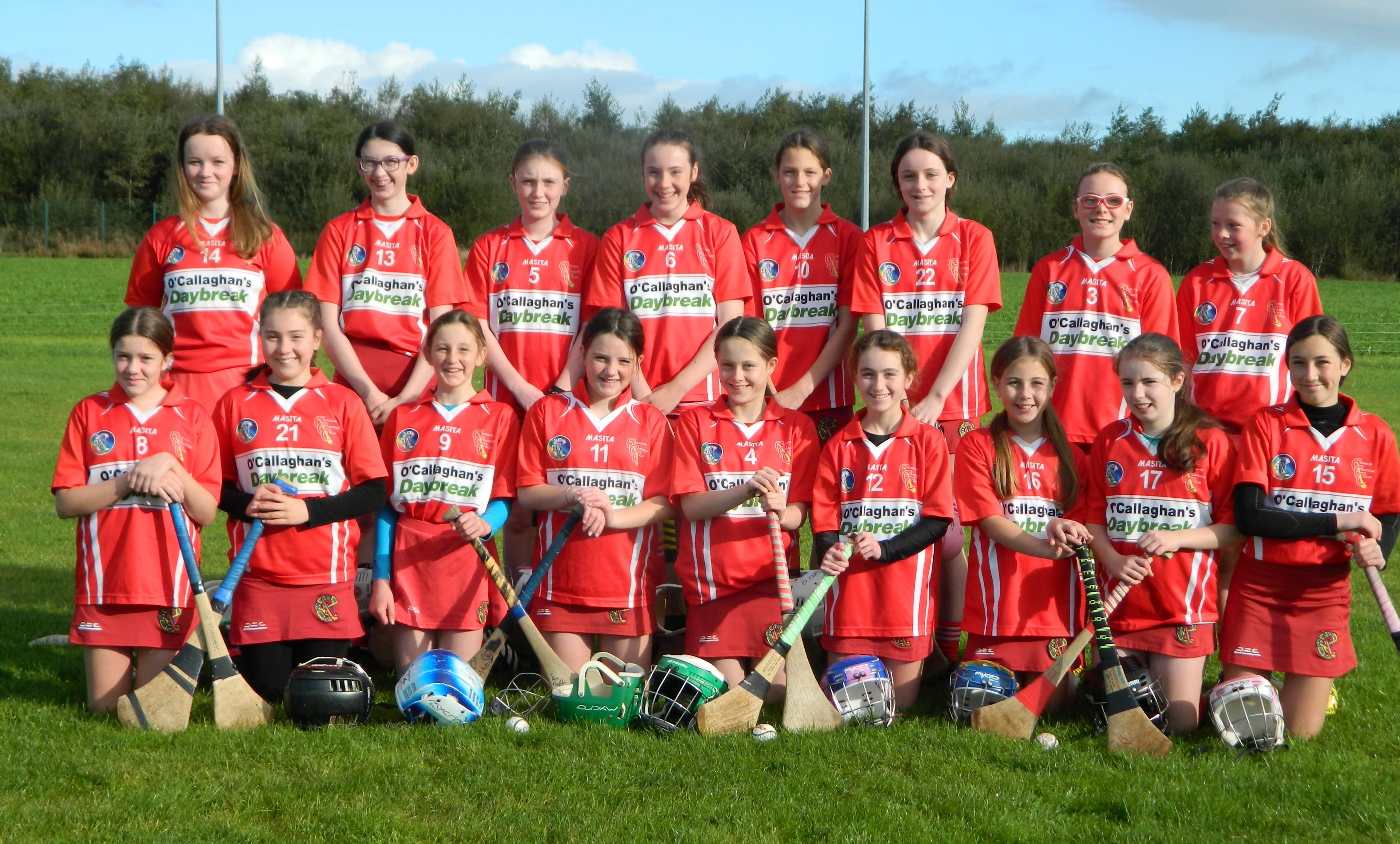 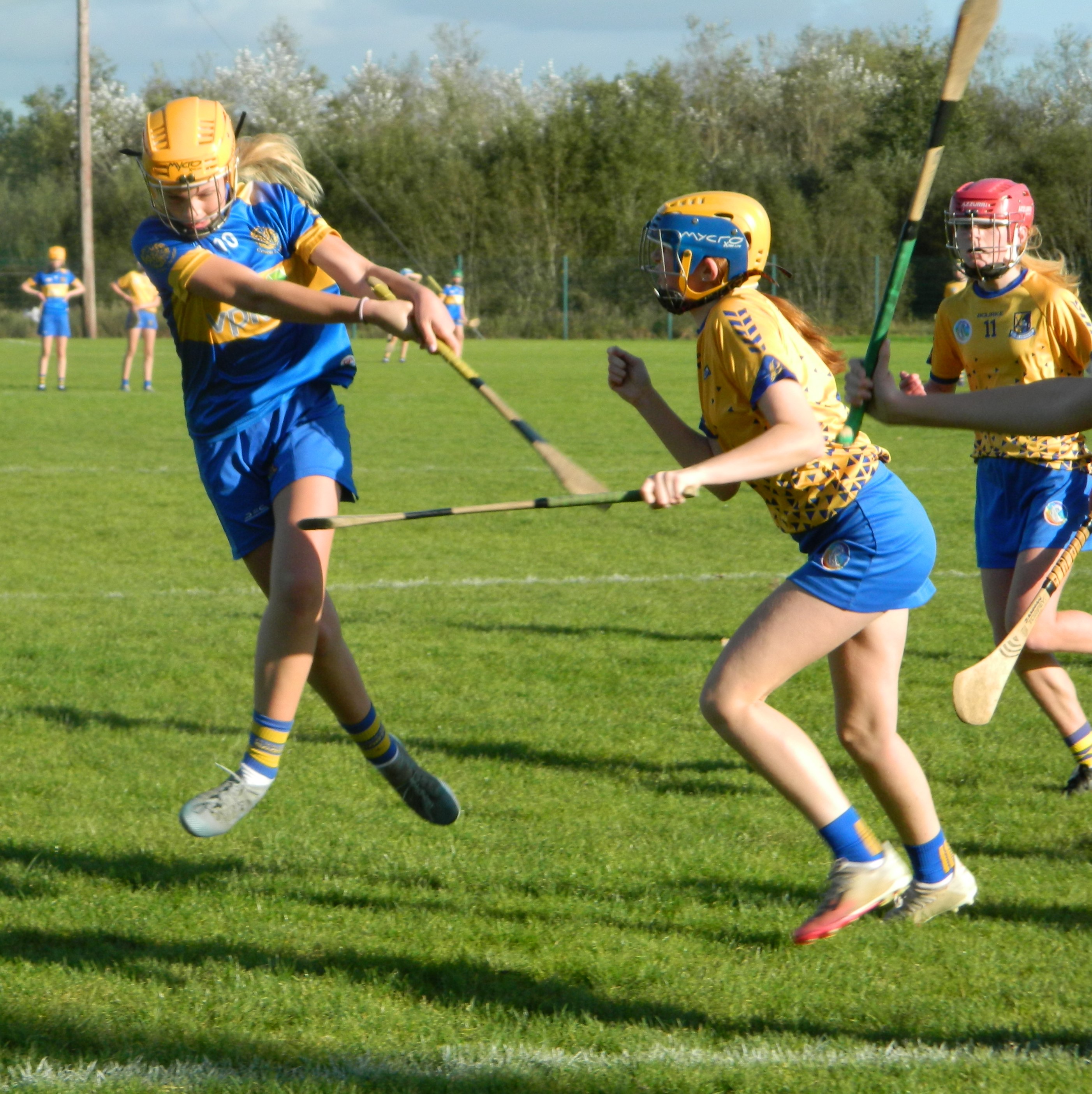 Action from the u13A Cup Final 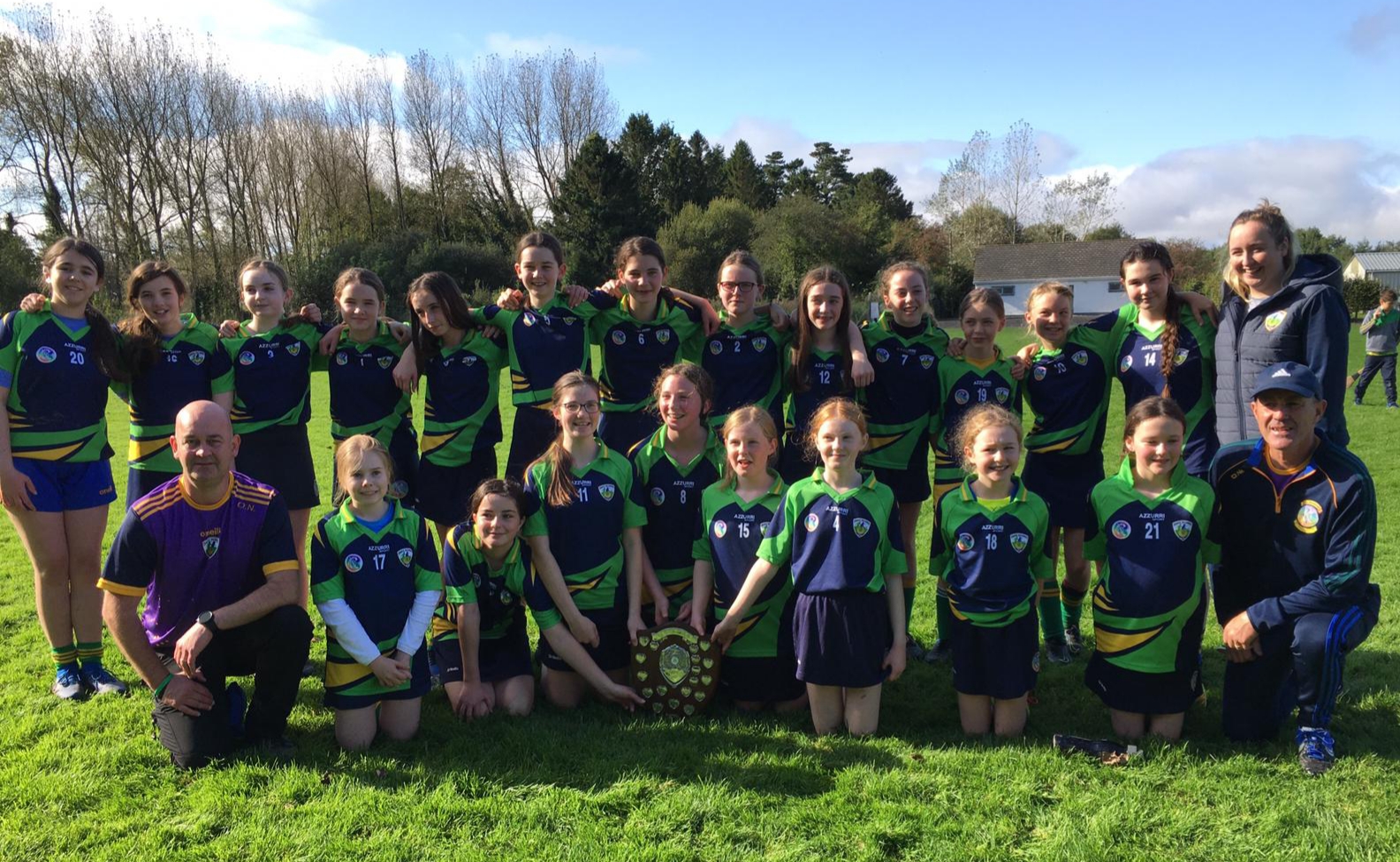 If your club would like to add a match report/ photo for your u13 final, please email to clarecamogieclubify@gmail.com