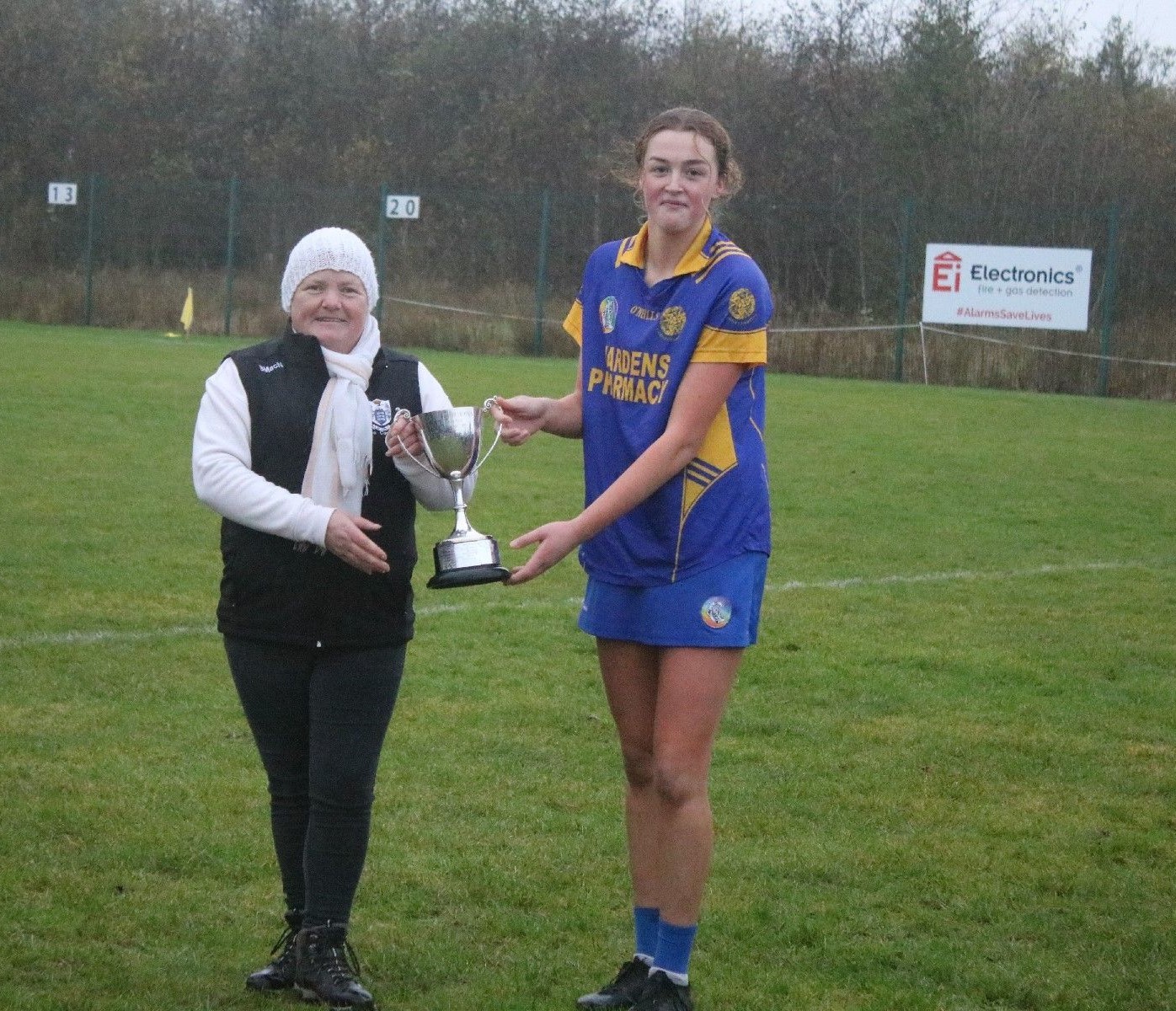 Newmarket on Fergus came out on top in a mighty battle against a very talented Broadford/Parteen side in the Minor B Cup Final on Saturday afternoon.

The dull and damp weather had little effect on either side as they served up a spectacle of Camogie, with all the major skills on show. These sides met in the group stages earlier on in the season with Broadford/Parteen deservedly coming out on top that day.

Saturday however, belonged to a Newmarket side who improved greatly throughout their U18 campaign.

The very talented Aisling Cooney put Broadford/Parteen ahead with five minutes on the clock, as she pointed from a ‘45.

Kaci Toomey replied for the Blues from a free and pointed again from play moments later.

The speedy Shauna O’Callaghan broke through and scored a lovely point for Newmarket with thirteen minutes gone before Cooney split the posts from another placed ball just before the water break. Newmarket were well served in their defence by Lucy Enright, Caoimhe Lally and Captain Ellen Casey.

A very even second quarter saw Newmarket just about keep their noses in front, with scores coming from Kaci Toomey, Ellen Casey, Saoirse Reidy and Izzy Coffey. While Aisling Cooney kept the scoreboard ticking over for Broadford/Parteen with three excellent points from frees leaving the half time score reading 0-7 to 0-5 in favour of the Blues.

The halftime talk worked wonders for Newmarket as they put in a brilliant third quarter out scoring their opposition 6 points to 1.

Broadford/Parteen goalie Laura Ryan was fantastic between the posts with numerous saves and was assisted brilliantly by her team mates including Sinead Vaughan and Ella Ryan Meany. Emer Cassidy broke through the Newmarket defence and scored an excellent point on the 50-minute mark followed up with another from Cooney from a placed ball.

Toomey split the posts from a placed ball for the Blues before Amy Madden got on a ball in space, sold the dummy and sent the ball flying to the back of the net, seeing Newmarket crowned U18B champions on a scoreline of 1-14 to 0-8 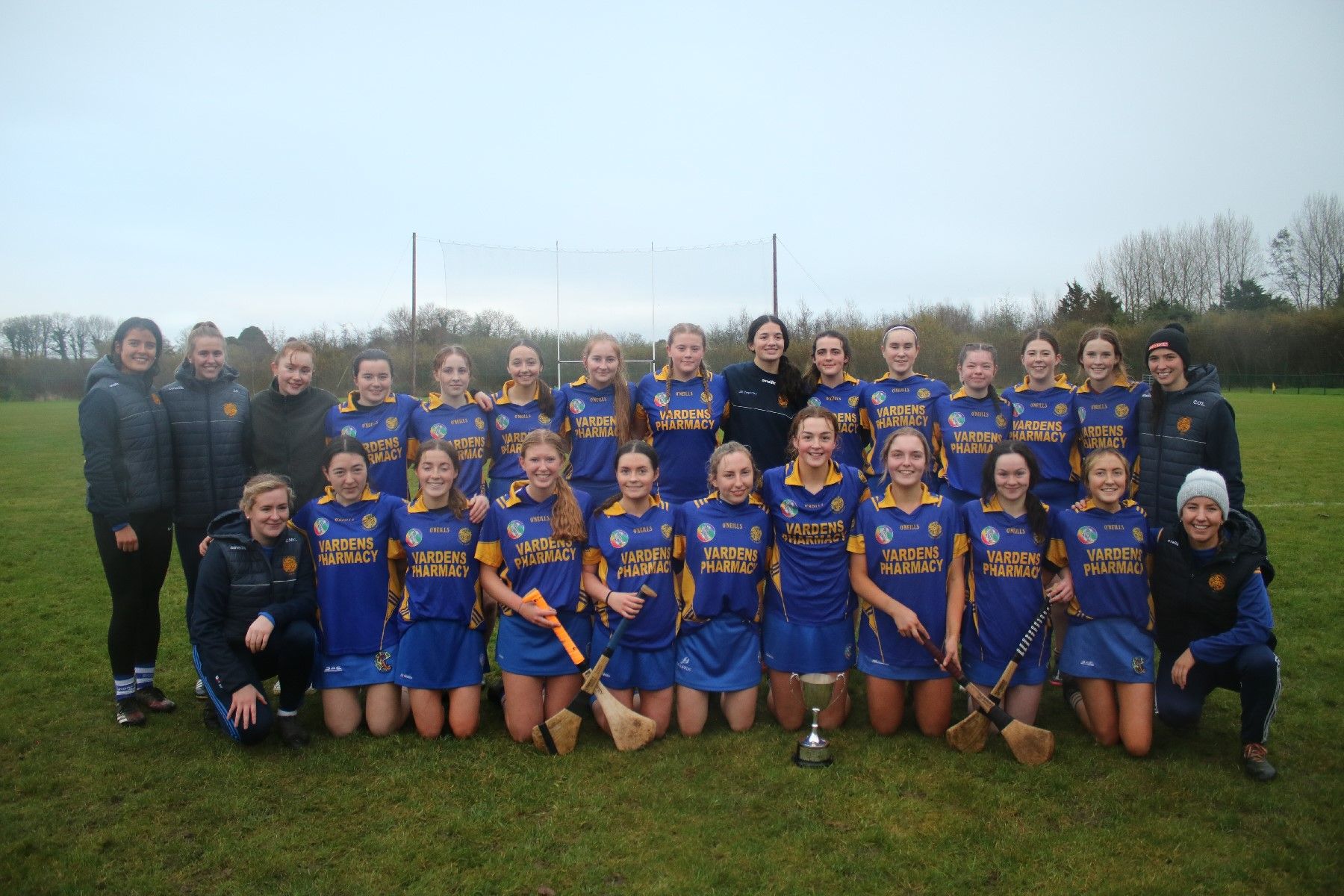 Ruan had a deserved win over Kilmaley on Saturday afternoon, winning on a score line of 1-11 to 0-4. A steady breeze and a shower in the first half made it uncomfortable but didn’t impact the outcome of a very entertaining match. Right from the start the Ruan girls put their stamp on the match winning all the early battles for position and coming away with a point by midfielder Aisling Maloney from the first attack. Two wides were to follow before influential half forward Eve O’Connor put Ruan two ahead after a fine passing move up the field by Ruan. Kilmaley then got their first attack, however the solid defence by full back Meabhdh Casey saw the danger cleared. Kilmaley had two further attacks closed out by the Ruan defence and a stop and clearance from the goal area by keeper Ella Forde.

The opening quarter had both teams competing hard for position, however Ruan showed greater hunger and won most of the ground competitions, led by the half backs of Grainne Wynne and Neasa Ní Lachtnáin.  Neasa Ní Ainiféin cleared a ruck with the ball and struck for the 3rd score of the match. When Ruan won the puckout Kilmaley were under pressure straight away. Some good defending stopped the initial attack, however intelligent play from Ruan saw them recycle the ball out the pitch to Kate Forde in space, to knock it over the black spot. At this stage the rain started making conditions more difficult, however a fine passing move from Ruan saw Maloney notch up her second point from play which then saw the call for the1st water break. The second quarter saw some relentless pressure from Ruan with four successive attacks, however the return was poor with one wide and Kilmaley defending the others well, however they were only able to get the ball to midfield before it was returned by Ruan. When Kilmaley went forward the Ruan defending was tenacious with hooks and blocks, pushing the attacker wide and winning position. A fabulous passage of play out from the back by Ruan saw four completed passes to hand up the pitch and ball rebounding into play after Kate Forde hit the post from her shot.

While still on top Ruan were failing to convert four more attacks, with Kilmaleys Leanne Healy very involved in the defensive work.  The next two attacks by Kilmaley were both intercepted by centre back Sinéad Hastings with good position and reading of the game. Her clearance eventually led to the second point for Forde to finish the half six clear, however the dominance by Ruan having had the advantage of the breeze was not what it could have been.

The second half started brightly, the rain had eased and both teams went on the attack. Kilmaley had a free from inside the 65 drop short and was cleared by Ruan. The attack by Ruan captain Aoife Anderson was rewarded with a free which she pointed herself for the first score of the second half and the first from a placed ball. With Ruan winning the puckouts and the ground battles Kilmaley were finding it very hard to get a foothold in the game. From the next attack Ruan won a ‘45 which was converted by Anderson. Even against the breeze the Ruan girls were on top, and while Kilmaley were battling hard and never gave up it seemed the match was going to be Ruans.  The Ruan girls were able to work the ball down the field with better passing. Midway through the half Kilmaley registered a point from corner forward Caoimhe Cahill.  Kilmaley had a number of attacks, however the Ruan defence stood strong. Kilmaley got the next score from Cahill again. Ruan upped their game again and pushed forward a number of times leading to a goal by corner forward Aoife Glass after a goal line block by the keeper with 10 minutes left.  The goal finished the match as a contest, however there was still some fantastic skill on show. Kilmaleys Cahill finished with a brace of points from frees.

The fresh legs brought on by Ruan helped them to finish strongly, closing out the match with points from Forde and 2 from O’Connor, following some excellent passing particularly from corner back Aimee McDonagh who had tracked her player out the pitch.

The control in position by Ruan made the difference, and they were able to get as many scores against the breeze as with it and ran out winners Ruan 1-11, Kilmaley 0-4. 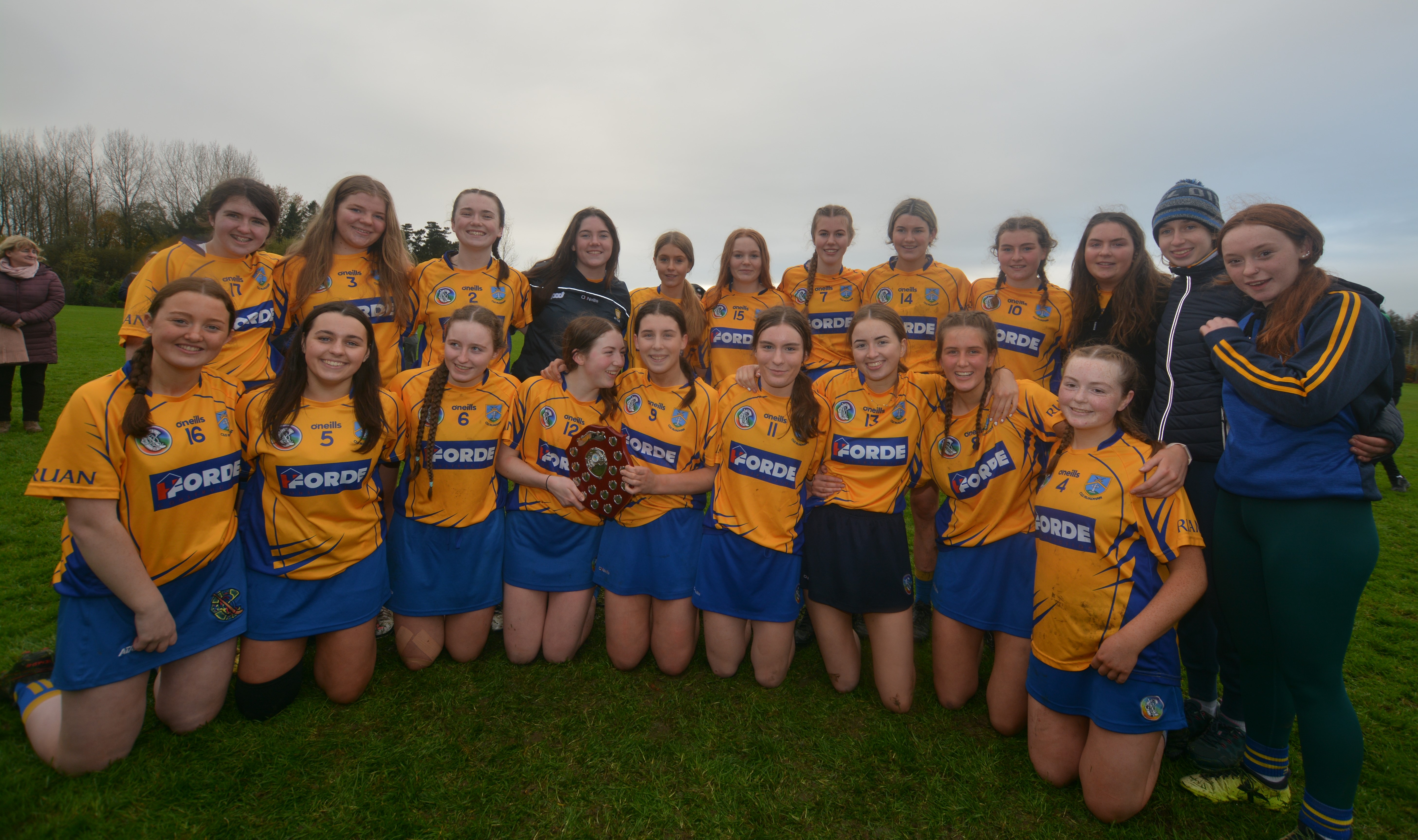 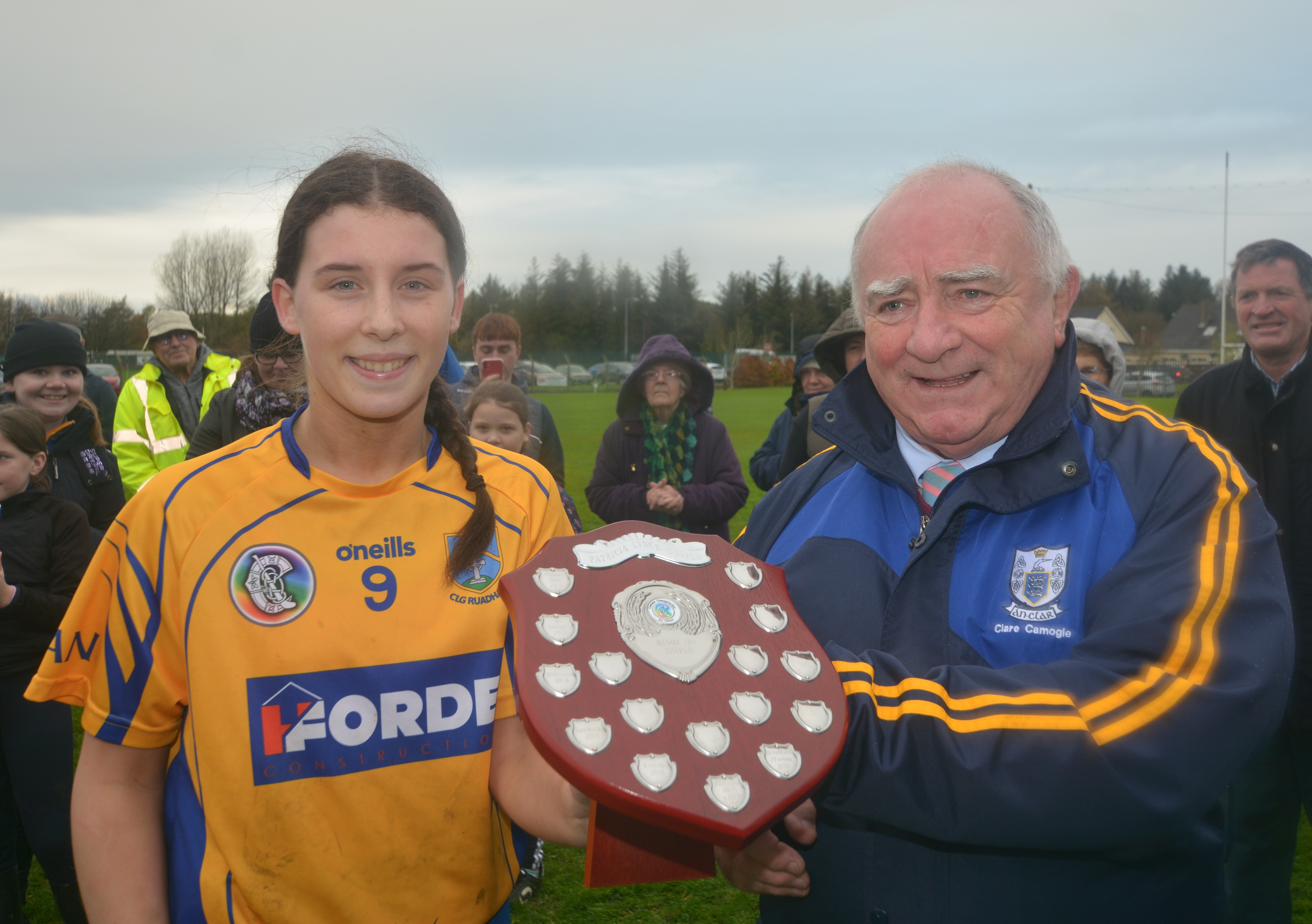 Our U15 league Div 1 and 3 finals take place this Saturda...

Our junior team take on Antrim today in the Glen Dimplex...

Well done to our 2 u14 development squads who completed i...

Congratulations to our u15 camogie development squad girl...