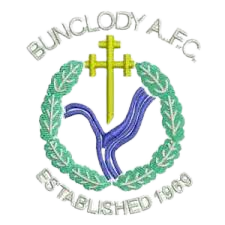 Download our mobile app to hear more about Bunclody AFC.

Today our Mens A team went out bidding to get into a Neil O'Sullivan Cup Final, however there was a strong All Blacks team stood in the way. Both teams probably started as strong as each other with no real team getting a clear break through, until the All Blacks right back made a pass forward an great flick from the All Blacks man seen him get in behind, the cross followed and the Mayglass outfit seen themselves go one nil up. It was unfortunate however that 10 minutes later we found ourselves 2-0 down. No matter what the lads were trying going forward it just didn't seem to click today like it normally does. A great ball by Cian Cowman on the 29th minute seen Johnny Melay get on the end of it but unfortunately he couldn't steer it home. A couple of pop shots followed on in the half but none really had the All Blacks keeper worried. Another break from All blacks seen their number 9 on the end of the ball and bad went to worse for our lads 3-0 All Blacks going into the break.

A number of changes at the start of the second half seen our lads start stronger and at times we were getting some luck but again the final pass was what was letting us down. It was one such move that we got in behind and after a bit of a scrap in the small box seen Dion Dunne tuck home. This kicked the boys on a bit and cross after cross pass after pass we couldn't get close enough to the all blacks goal to get us back into the game due to the tight nit defending and the constant pressure that all blacks put the lads under. A Bunclody attack seen the All Blacks centre half clear the ball to the centre mid whop threaded a ball through to the all blacks striker who only had to round Alex in the Bunclody Goal and tuck home.

The game finished 4-1 to the All Blacks. Unfortunately, we all have these games and today was just the boys game. No matter how hard they tried it just wasn't happening. The lads have one home game left in the league which will finish off what can be best described as a good season for the lads. Many injuries through the year hasn't helped the situation but these boys are a mixture of youth and veteran and I'm sure todays defeat will be a learning stone for many.

They will go again on Sunday and finish the season at home with a win!

Fair play to everyone who had travelled to the game today to support the lads. It is never gone un-noticed.

Did you know that just before Christmas we started up a s...

It was a great weekend all round for our teams with some ...

Wexford Biggest Pre Back to School Event ⬇️⬇️DJ Ciano is ...

Our B team played Caim utd on Sunday. This was a must win...

Our Women's team were out on Sunday away to Adamstown. Th...

Yesterday our Men's A Team played North End united who we...