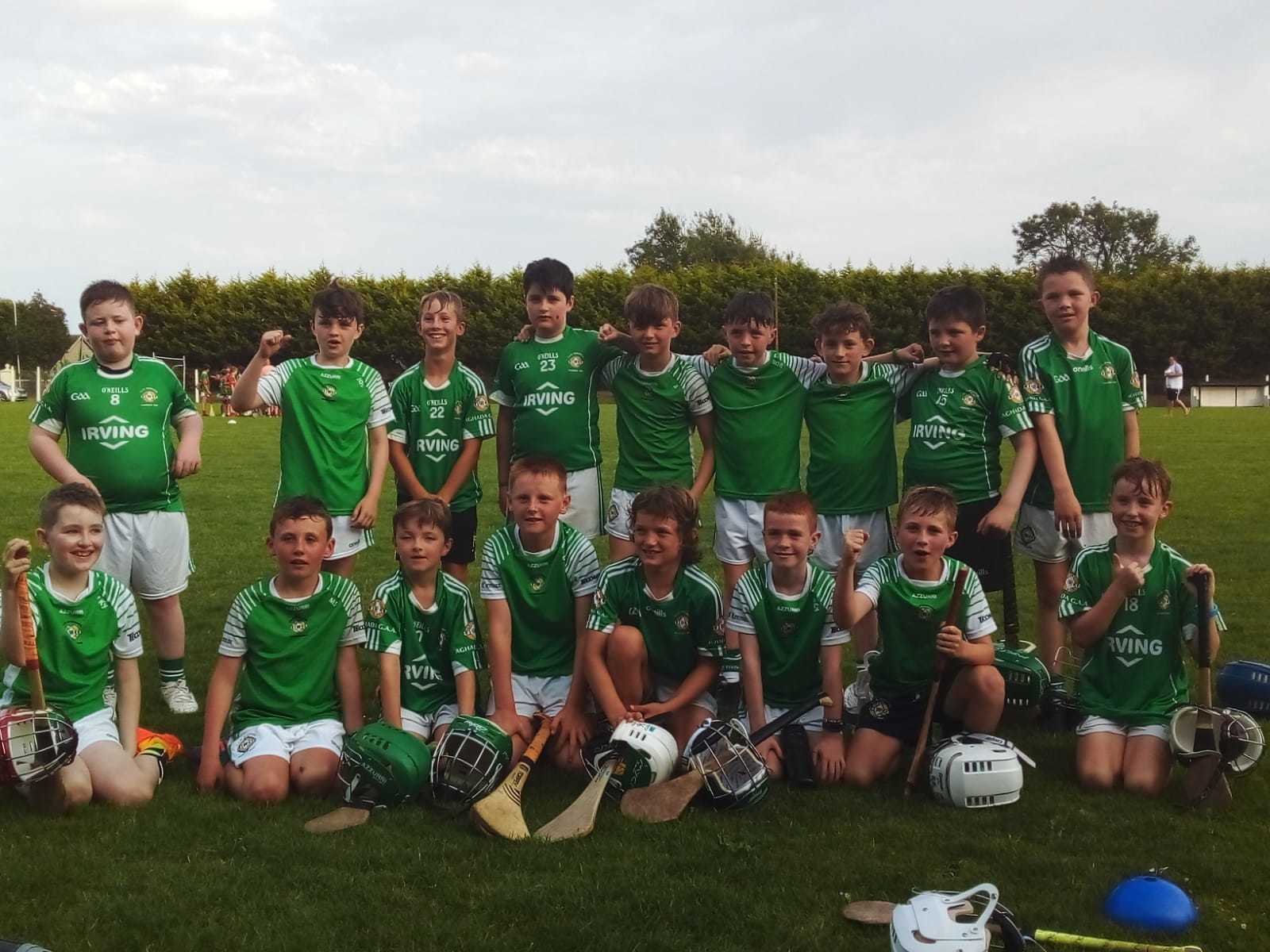 Hi folks, hope all is well in the parish, this scribe is away for a few weeks so banking on the kindness of our dedicated mentors to bring us the match reports as they happen, so a big thank you to all who have submitted reports. We witnessed a brilliant All Ireland hurling final last weekend with Limerick and Kilkenny going at it hammer and tongs and not a yellow card or a foul throw in the game, after a season when both would have been high in the statistics, this stat was a strange one that not many would have predicted in the showpiece spectacle. Let’s hope this weekend’s football decider is equally as enthralling and keeps us guessing on the outcome up until the final whistle, although it won’t do much for the nerves of the Galway and Kerry supporters of the parish, let the best team win. Another worthwhile mention was the Ireland rugby teams historic series victory in New Zealand and the song chosen by the management team and played after the game in the “Cake Tin” stadium in Wellington was ‘To win just once’ by the Saw Doctors. This song was also chosen by Conor Counihan and his management team and played after Cork’s All Ireland win in 2010, ah yes to win just once that would be enough but when you do you just can’t help wanting more!

Our u15 footballers will be disappointed with their second half showing against a strong Midleton team in Towns Park last Wednesday evening. Trailing by 2 points at half time we only managed to score 1-1 after the interval as we left our shooting boots at home. The first half was our most productive spell with 2 quality goals from corner forward Cormac Walsh after 2 excellent assists from full forward Jack Linehan. Cian Moore, Andrew Murphy and Jack kicked points as we trailed at the short whistle 2-6 to 2-4 despite the best efforts of Eoghan Walsh, Pierce McLoughlin, Cillian Falvey and Joe Connolly with our custodian Jago Evans at his commanding best and very accurate with his kickouts. In the second half everything Midleton touched turned to gold as we were the total opposite squandering a host of chances. In centre back Dara O’ Conchubhair, we had one of the best performers on the pitch and he along with Tom Walsh took the fight to the magpies and it was Dara who stormed forward from defence to plant the ball in the back of the net after 6Cormac’s shot came crashing back off the crossbar. Cian Moore pointed well, and we continued to create chances, but it was the away sides night running out comfortable winners in the end 4-11 to 3-5. With players to come back and hard work going on in the training ground we should still be in a decent position come championship time in a few weeks. Team & scorers Jago Evans, Eoghan Walsh, Eanna Crowley, Pierce McLoughlin, Cillian Falvey, Dara O’ Conchubhair 1-0, Joe Connolly, Sam McAllister, Josh McCarthy, Tom Wash, Andrew Murphy 0-1, Ronan Norris, Cian Moore 0-3, Jack Linehan 0-1, Cormac Walsh 2-0. subs used Fionn O’ Sullivan, Adam Lewis, Isaac Oosthuizen

Premier 2 Football Championship Round Robin Round 1 (report by Vince Rohan) Aghada 0-07 Carrigaline 5-09 Aghada began their minor football championship campaign last Friday evening in a sun drenched Rostellan where they faced Carrigaline. Our lads started well with the home crowd helping to roar the team on. Evan Crowley and Conor Geary were competing well in their respective corner back positions with Tomás Condon covering a pile of ground from wing back. With the scores locked at a point a piece, Carrigaline struck for their first goal of the game which took a fortuitous deflection to end up in the back of the net. Aghada responded brilliantly to this setback with captain Cian Hegarty raising 2 white to narrow the gap to the minimum approaching the half time interval. Unfortunately for Aghada, Carrigaline hit us for a sucker punch just before the whistle. Carrigaline buried a goal and a point just as Aghada had looked to be going into the break in a strong position. The score at half time was now 2-03 to 0-03 in favour of the visitors. Carrigaline hit Aghada for another goal immediately after the restart to make the home sides task even harder. To Aghada’s credit, the lads kept motoring and eventually got their reward with two well worked points thanks to great work from Davy Wallace, Robert Dean and James Motherway. Even though we were competing well, Carrigaline always seemed to have the upper hand in the game and they punished us dearly on the scoreboard by being extremely clinical. In the end the score ended up being 5-09 to 0-7. Aghada will be proud of their efforts with the scoreboard being a very harsh reflection of the game. Best on the evening for Aghada were John Walsh (who was like Armagh’s Ethan Rafferty adding an extra man out the field whilst also making some top class saves), Robert Dean (who covered every blade of grass), James Motherway (who held the ball up excellently in attack for Aghada) and finally the man of the match for Aghada was Tomás Condon. Aghada now face divisional side Beara in the next round of the competition in Brinny at 3PM on Sunday the 31st of July. First up for the lads is a massive local derby against Carrigtwohill in Carrigtwohill in the first round of the hurling championship on Friday evening. It would be great to get a big crowd up to Carrig to support the lads.

Aghada 3-12 Mayfield 2-8 On an aptly named forest pitch Aghada u13s once again produced a display of another kind. A battling performance from all 18 lads in high temperatures, led by captain Conor Padden playing 13 aside on smaller pitch due to fair play rule, the seasiders had to dig deep in the first half to get a hold on the game and get a lead before HT. A goal from Robbie on his return settled the nerves and with Kaylan moved to midfield from wingback where he was already dominating Aghada started to drive forward at every opportunity. Matthew Condon led the attack from the 40 and broke through at every opportunity to set up scores. Another goal from Eoghan gave Aghada a 4 point lead at HT. Ciaran Cashman revelling in his new role at centre back all through the first period with Rossa White timing tackles as usual to perfection. Matthew went to wing back and Eoghan to the 40 and David Murphy ran through midfield with Kaylan in support to push on in the 2nd half. With lads being moved and rotated on and off, fellas played in new positions. Hugh going to no.6 to give Ciaran a break and Kaylan going to edge of the square as a target before being sent back to our own square to mind the house near the finish. Trystan Pomphrett put in a savage shift at wing back and Marcus O’Loughlin battled hard and kept the ball moving during a hectic 2nd half. When fellas put up their hand to come off that's a sign that the tank is empty. Great to see. And a mention to U13 footballer Seán O’ Reilly, who came 2nd in 80m sprint All Ireland B Athletics Championships.

A balmy and warm Monday evening saw 15 young Aghada hurlers welcome their neighbours from across the harbour to a very busy Páirc Ui Riain. Referee Mary Byrne Swayne played her part in a very good contest and with the best interests of the players in mind, reintroduced a water break in each half. No tactics boards on show though!! The boys in green were out of the blocks straight from the throw in with David starting the night as he meant to go on. A long hard delivery going directly to the top corner after finding space from his marker. Soon after he added a point and the scores kept coming from the very hardworking Áth Fhada buachaillí. Cobh were right in the game and working very hard with some tenacious tackling and but for some superb saves from Rian and clearances from Darragh C, Cormac and Leon in front of him. In fact Cormac was having a tussle of the ages with his opposite number and knew well he was in a game! Dylan K. was calmness personified at no6 while massively aided by the terrier that is Finbarr and the equally tenacious Darragh Cal. beside him. Jack K. in midfield gave a master class of finding himself in the right place on numerous occasions and never stopped tracking back and making lung bursting forward runs to feed the ball into a rampaging Eoin K. at no14 who buried a goal to the net. Sam got in on the act with a lovely cute finish and some smart footwork to keep the scoreboard heavily in green. Marcus and Harry won puck outs from Rian as they arrived and Tim got involved with some great pressure on the defence, running himself into the ground and distributed hard won ball to those inside him. All in all a very good evening for the lads in hot conditions. Cathal played in so many different positions we lost count. Whilst in defence, his long clearances and long range frees took the pressure off the lads time and again and broke Cobh hearts almost as much as the imperious goalkeeping from Rian who just wasn’t letting anyone or anything past him on the night! We couldn’t pick a best in the night 3 without being unfair to the other 12 as from 1 to 15 there was a level of effort and skill on show that kept the vocal home crowd enthralled for the 50 minutes. Áth Fhada Abú.

Best of luck to all our academy teams who will be playing the summer league finals on the main pitch in Páirc Uí Chaoimh this Saturday, here is a report from Pat Scanlon on the recent U9 summer league games that were held in our club.

Aghada hosted round 2 of the Rebel Óg Under 9 Summer Hurling League on Wednesday 12th July, in the balmy evening summer sun, down in the forest pitch in Rostellan.

Five clubs consisting of Fr O'Neills, Kiltha Og, Cobh , Youghal and Aghada, arrived in Rostellan, with Youghal entering three teams , Aghada having two teams and one team each from Fr O Neill's, Cobh and Kiltha Og. The kids from all clubs enjoyed a fantastic evening of hurling and fun in spite of the hot conditions, great credit to all the club's players and mentors for their engagement and support on the evening. The Aghada U9 group, consisting of a total of 21 players, made up two teams who gave a display of hurling, commitment and camaraderie in all their four respective games. This group has made massive progress this year, their approach to their training and their willingness to learn is fantastic and they are all a credit to their families. Special thanks to the parents, mentors and most importantly the kids for making a great evening of hurling. Le meas, Aghada U9 Mentors.

Hard luck to Maisie McRae, Natalia O’ Connor and Brianna Smith who lost out in extra time in the u16 All Ireland football final against Dublin, congrats on a great year and hopefully ye can enjoy many more great times in the years ahead.

All roads lead to Ovens on Saturday for our Adult footballers first round championship match @ 4pm against Bantry Blues, so why not go along and support the boys in green your support would be greatly appreciated. The best of luck to the management team and all the players, Be Seen Wear the Green.

A Chara, The evenings are closing in and with the lights ...

Aghada GAA Juvenile NewsHi folks, hope all is well and ...