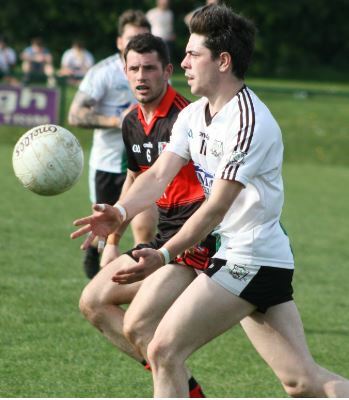 Longwood IFC Group B - Round 2

Goals win games, a game of two halves – pick your own cliché.

In fact, both were truthful and accurate on Saturday evening in Bective, where Longwood and Nobber battled it out for pole position in Group B and a place in the quarter-finals.

Nobber were the better team in the opening half, Longwood much the stronger in the second period. But ultimately it was the goals that decided the game. It is scant consolation for Longwood that they scored on fourteen occasions, more than the dozen of their north Meath opponents; it was the always-threatening Sean Meade’s hat trick of majors that made the difference.

Meade did most of his damage in the opening half, chalking up 2-4. In fairness, he was very well marshalled by Niall Mulvey in the second half, his third goal coming in the dying seconds of injury time as Longwood pushed for what proved to be an elusive equaliser.

Bective’s pitch was in fantastic condition, but some heavy afternoon showers made for a slippery surface, and players losing their footing became a regular occurrence throughout the contest.

Nobber were first on the scoreboard, a Sean Meade point within two minutes giving them a lead they would never relinquish. Longwood enjoyed plenty of possession over the next five minutes but struggled to carve an opening through Nobber’s massed defence. Meade’s opening goal arrived soon after, an excellent finish after some swift hand passing opened up the Longwood rear-guard.

Longwood eventually registered their opening score courtesy of an excellent Niall Mulvey point and this was backed up by a Mickey Burke free. Nobber would score the next three points before Longwood responded in kind with three of their own, two from Ryan Moore either side of an excellent Sean Coloe over.

After struggling with illness in last weekend’s hurling championship defeat to Kilmessan, Captain Coloe was back to his swashbuckling best against Nobber. Some of his high fielding was a joy to behold and, like a captain should, he led by example throughout the game.

Having clawed their way back into the game, Longwood would concede 1-2 in the closing minutes of the half, the goal showing Sean Meade’s ruthless efficiency in front of goals as he capitalised on an error in the Longwood defence, calmly dispatching the ball to the net past Harry Hogan.

It was a real sucker-punch and gave Nobber a huge lift as they took a seven-point lead to the break.

Having assessed the situation and rearranged their team during the interval, Longwood would need a strong start to the second half if they were to have any chance of reversing the tide. A run of three successive points from the ever-dependable Ryan Moore reduced the deficit to a more manageable four points. Moore was his usual majestic self throughout, registering eight points, six of which came from play. The night feeds and nappy changes are clearly not affecting Longwood’s sharp-shooter!

Back came Nobber with a brace of points and they led by six points with seventeen minutes to play.

Longwood would dominate the remainder of the contest. Displaying calmness and composure, they kicked five successive points; the run was initiated when Harry Hogan effortlessly converted a 45-metre kick and was completed by an excellent Thomas Coloe point from play. In between, Moore racked up another three points, one of which was particularly memorable when he sold an outrageous dummy to his marker before conjuring an exquisite finish off the outside of his left boot. A score worthy of the admission fee.

The gap was down to just a solitary point and Longwood were very much on top. Despite having a number of chances in the closing minutes, they could not muster an equalising point.

Deep into injury time as Longwood continued to push forward, they were hit on the counter by Nobber, the ball ended up in the hands of Sean Meade and he finished to the net with the final kick of the game.

The four-point margin of defeat was harsh on Longwood, but championship football can be cruel. You don’t always get what you deserve.

Nobber will advance to the quarter-finals. Longwood can still join them but will have to do so the hard way. The final group game sees the boys square up to Dunderry in a couple of weeks.

Missing your regular dose of football? Fear not, while ...

Please note that the main entrance gates to our club gr...

The fixtures have been announced for the 2023 National F...

Following on from our super successful Gameathon, our in...