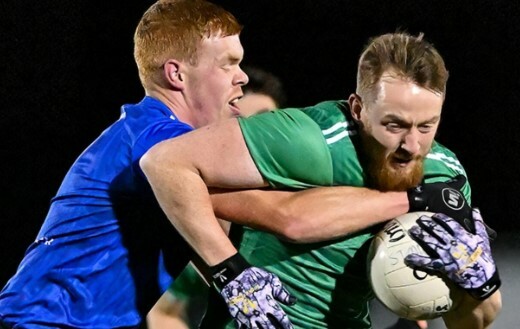 The Longwood, Ballivor, Boardsmill and Clonard combination without the influential pair of Mickey Burke and Billy Hogan and manager Brendan Murphy, turned in a terrific performance to keep their hopes alive.

Following an excellent early stop from Johnny Lynch to deny Ryan Raleigh, Blackwater were eager to make their first half wind advantage count and early scores from Liam Ward and Shane McDonnell in front following a cagey opening. Danny Dixon provided the perfect settler for the underdogs when he collected a pass from Fergal O’Hare before tiptoeing his way through the Blackwater defence and calmly slotting to the net.

Ryan Moore put his side two in front, but a determined Harry O’Higgins was hauled down for a penalty with Michael Newman expertly converting the resulting spot kick. The excellent O’Hare fired over an equalising score after 24 minutes for his Moyfenragh outfit. However, a quickfire brace from the lively Liam Ward of Drumbaragh did give the Kilmainham, Moynalty, Carnaross, St Michael’s and Drumbaragh amalgamation the edge but a score from Raleigh on the stroke of half-time left things finely poised at the break, 1-4 to 1-3 in favour of the Kells side.

With the wind at their backs in the second period, the James Rafferty, Damien Griffin, and Cian Royston managed side firmly grabbed the initiative in the preliminary stages. An inspirational score from Sean Coloe was followed up by a pair of pressure frees from goalkeeper Harry Hogan to give Moyfenragh a 3-point buffer.

Newman kept David Nolan’s charges in touch with a free but a beautiful score and free in the 43rd and 49th minute from Moore edged Moyfenragh ever closer to a notable win. Substitute Hughie Corcoran converted a routine free 10 minutes from time but another well-executed free from Moore kept their Blackwater counterparts at bay. Newman did reduce the arrears to two but some stout defending from the superb Jamie Smith, O’Hare and Damien Healy helped to seal a memorable victory for the men in green.

Moyfenragh can look forward to a winner takes all clash with Boyne Valley in 7 days’ time but back-to-back defeats for Blackwater means that their finale against Tara will be nothing more than a dead rubber.