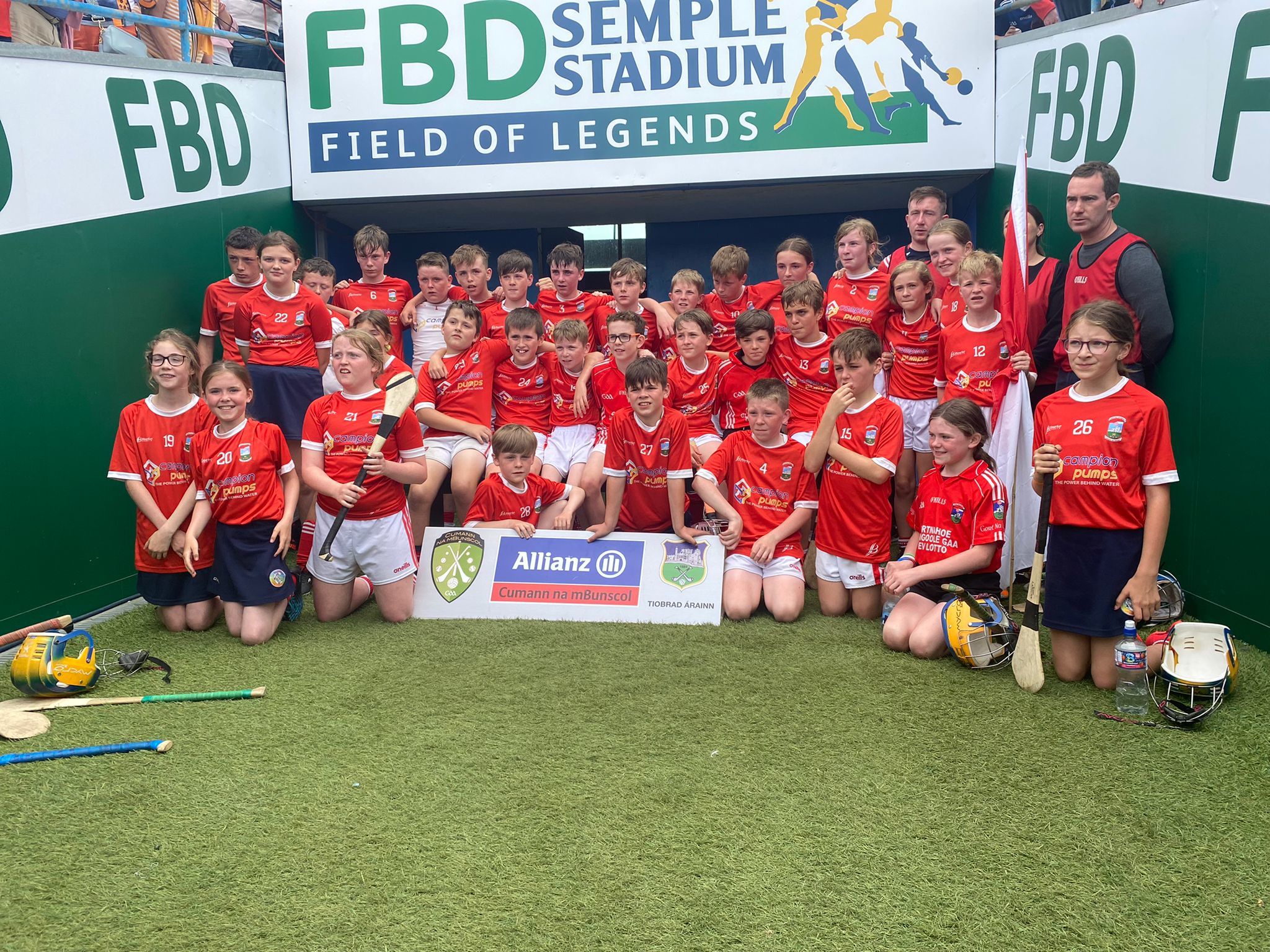 Report by our very own club player and Gortnahoe N.S teacher TJ Mockler.

Semple stadium was the venue for the cumann na mbunscoile Co.Final on Wednesday at 3.30. Thirty three pupils from Gortnahoe N.S. wore the rebel red and white colours as they decended upon the home of hurling in pursuit of silverware. Gortnahoe were to face a brilliant Kilsheelan NS team who were highly impressive throughout the championship having beaten some great sides, most notably Killenaule N.S. in the Co.Semi.

The whistle blew and Fergal Horgan released the ball in the colleseum of hurling. Adam Norton settled the nerves early with a mighty strike over the bar from the right wing in the opening moments of the game. This was to be met with a quick reply from Kilsheelan. The opening goal of the game came from a long ball into the forwards by Taylor Corbett. Taylor struck her second soon after and was proving to be a thorn in the Kilsheelan side. Aiden Bourke struck a goal soon after leaving Kilsheelan an uphill task from then on. Kilsheelan fought valiantly but came across backs of exceptional quality in Conor O'Gorman, Patrick Brophy and the highly impressive Eimear Teehan not to mention our superstar goalie Adam Healy. The work of the midfield created openings for Billy Gleeson and Dan Fennelly who were both exceptional on the day. Kilsheelan gave themselves a lifeline before half time when Stokes scored a goal to be savoured after some brilliant individual skill. Half time came with the score 6.5 to 1.2.

Gortnahoe introduced Conor Stanley at half time who showed the management exactly why he should be playing with brilliant work rate and skill. Conors father had led Gortnahoe GAA club to it's finest day in that stadium and would be very proud of Conors exceptional contribution. If a comeback was to happen Kilsheelan would need early goals and they threatened massively, but gallant defending denied them of this. The goal of the match came with 20 minutes to go. A ball dropped and a half chance presented itself. One would have to look twice to ensure it wasn't John Fenton in a Cork jersey. I can confirm it was in fact Martin Gleeson in a Gortnahoe jersey. Martin pulled on the ball and nearly broke the net which ended any fight back which may occur. Martin was replaced by his younger brother Callum in a touching moment soon after. Callum would go on to emulate his brother and fire 1.2 for the gortnahoe side. Jack Sajjadi, MJ Brophy, Niamh Gleeson and Cian Crawford Rohan were introduced to ensure that the cup was to spend the next year in Gortnahoe NS. The whistle blew and the sound of euphoria filled the air as Gortnahoe claimed the title for the first time in sixteen years. The shield was presented to captain Adam Norton by Andy O'Gorman who had presented the trophy to Kevin Slattery sixteen years prior.

All the school staff played a huge roll in preparing this team for such a memorable victory. The training, kind words, support and advice from all on the Gortnahoe staff were vital in preparing the pupils for this big day. The parents of the pupils have raised children with the right attitude and temperament to compete in such spectacles. And finally the coaches who have given up their time to train these young boys and girls since the age of five. This victory is a small reflection of the selfless work you do.

On behalf of Gortnahoe N.S. I would just like to thank everyone for their support of the school and team over the last number of weeks. Bunting was placed up, people helped with the catering afterwards and most importantly all of you supported and encouraged the thirty three pupils who tagged out for Gortnahoe NS. We have a wonderful school and are extremely proud of the school, pupils and community. Hon the Hoe!! 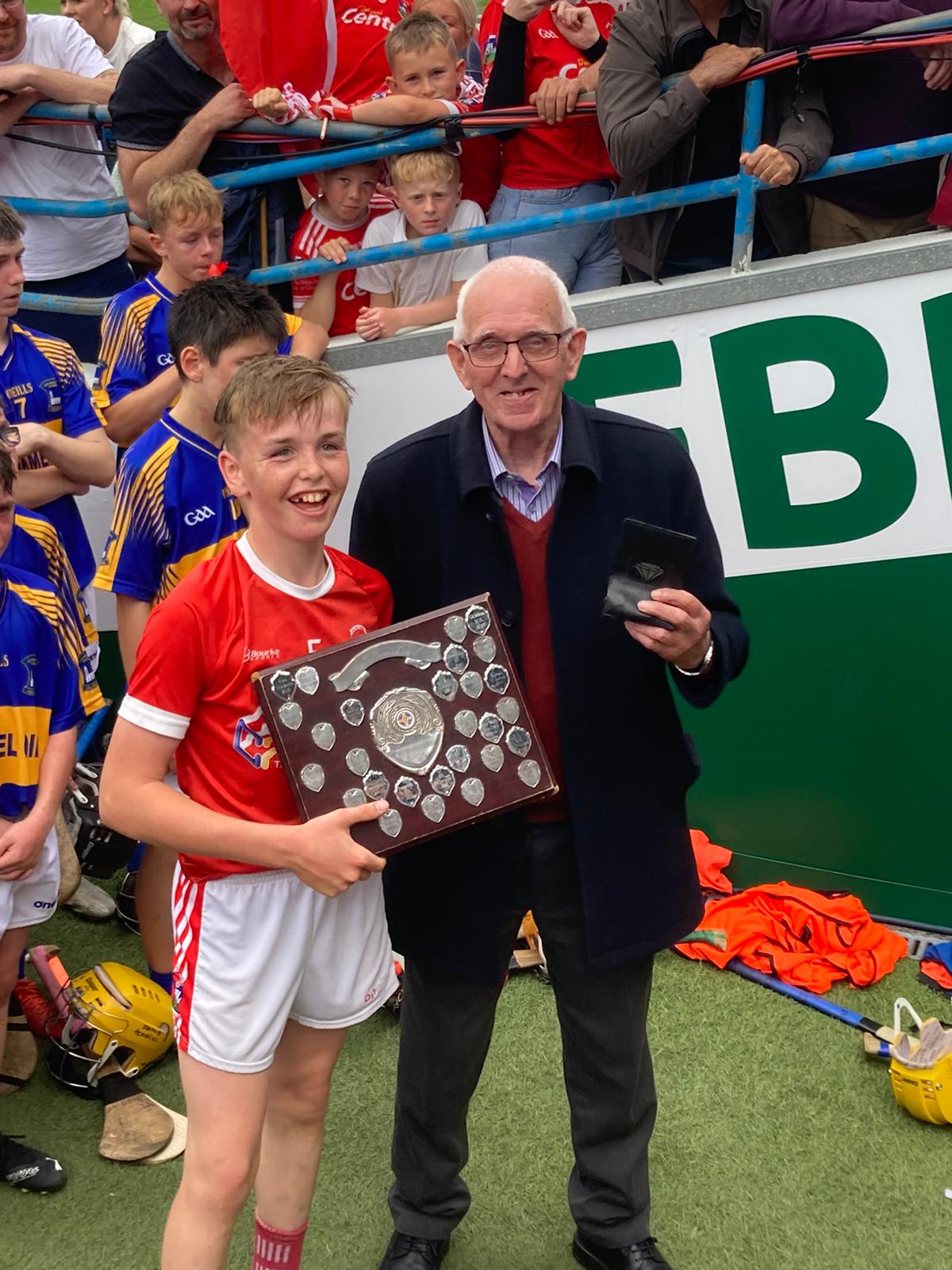 Best of luck to Dan Fennelly

Best of luck to Dan Fennelly who has got emergent talent ...

Best of luck to our U17 hurlers

Best of luck to our U17 hurlers who play neighbours Moyne...

Best of luck to our U13 hurlers

Best of luck to Lorcán Bourke who will be playing in the ...

Congratulations to our former club player Mick Phelan as ...

Gortnahoe Glengoole would like to wish the very best of l...