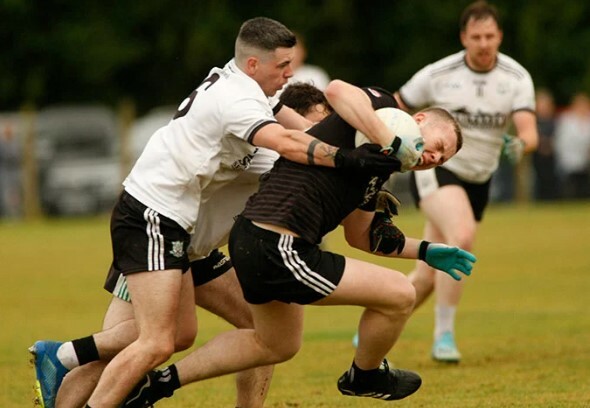 Longwood IFC Group B - Round 3

Longwood’s involvement in this year’s Intermediate Football Championship came to an end after a disappointing loss to Dunderry on Rathmolyon’s immaculate pitch on Saturday evening.

With a place in the quarter-finals at stake and conditions very slippery after heavy rain, a classic was always unlikely but credit to both teams as they played some good football in patches.

Dunderry grabbed the initiative early on, Luke Martyn winning and converting a mark with less than a minute on the clock. Longwood responded well, Ryan Moore kicking a fine point from play a little more than a minute later.

With seven minutes on the clock Luke Martyn burst through the Longwood defence and looked sure to score a goal. Billy Hogan, reverting to his customary role of goalkeeper in the absence of his brother Harry, thought differently and displayed fantastic agility to divert the ball around the posts.

This brilliant save seemed to ignite the team and they proceeded to dominate the next 15 minutes. Damien Healy and Sean Coloe began to dominate midfield and set up a number of attacks, one of which ended with Ryan Moore bearing down on goals only to see his shot parried by the Dunderry keeper. Undeterred, Longwood continued to exert their influence and would reel off four unanswered points courtesy of Thomas Coloe, Paul Gill, Mickey Burke and a Ryan Moore free.

Credit to Dunderry, they responded with a pair of points to reduce the margin to two points with twenty four minutes gone.

Then, a major turning point. Ross Kerrigan, a key figure on the Longwood team went down clutching his knee in agony. Given that it was a non-contact injury, the Longwood supporters feared the worst. Sadly, their fears were to be realised as the tigerish defender had to be replaced. While it may be a stretch to say Kerrigan’s injury was the difference between winning and losing, it is factual to say that his direct opponent, the dangerous Stephen Coogan, had barely been mentioned in the opening 24 minutes.

The injury and subsequent readjustment seemed to briefly unsettle Longwood and the closing minutes would see Dunderry tag on three points, ensuring they took a slender lead to the interval.

The second half started positively, a Ryan Moore free brought the sides level and hopes were high. But Dunderry would control much of remainder of the game. Eighteen minutes would pass before Longwood’s next score, a fine point by the always industrious Sean Coloe. During those same eighteen minutes Dunderry would register four points.

This was to be the critical period of the game and it enabled Dunderry to construct a defensive shield that Longwood would struggle to penetrate. With Longwood pushing forward in search of scores, inevitably some gaps appeared at the back and Dunderry exploited these gaps to plunder two late insurance points.

Longwood’s Ryan Moore would see red late on, lashing out in frustration having been subjected to persistent fouling in the final quarter.

The game petered out and Dunderry ran out deserving winners in the end. We wish them well in the knock-out stages.

So Longwood’s season came to an end earlier than they would have liked but there are many positives to be taken from the year. For a start, many young players have cut their teeth in adult football over the past number of months. Special mention to Ciaran Sheridan who has looked “to the manor born” since graduating from last year’s minor team.

The ongoing excellence of established stars like Ryan Moore, Niall Mulvey, Ross Kerrigan, the brothers Coloe, Healy and Hogan can only help the younger members of the panel in their progression. The future is bright.

Huge credit must go to Vinny Byrne, a club stalwart who surely bleeds black and white. Vinny picked up the managerial reigns as championship dawned; his knowledge of the game and positive outlook energised the panel and this was clear to see on the field of play.

Securing Longwood’s intermediate status may seem like scant consolation but, in a season when three teams will be relegated, this is an achievement not to be underestimated. We look forward to 2023 with renewed hope and optimism and we thank our players and management team for the excitement, entertainment and excellence they have given us throughout this year.

Missing your regular dose of football? Fear not, while ...

Please note that the main entrance gates to our club gr...

The fixtures have been announced for the 2023 National F...

Following on from our super successful Gameathon, our in...