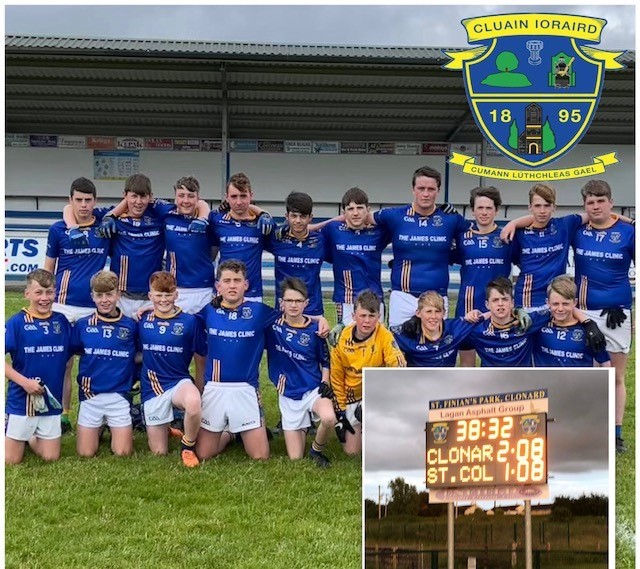 In the short seven-year history of St. Finian’s Park it has seen its fair share of excitement, tension, delight and disappointment across all codes and all age groups. But last night surely ranked as one of the most dramatic.

A strong St. Colmcilles side made the long journey across the county from the seaside, together with significant support considering the hour-long (plus) drive. The later 8pm throw-in time surely helped, and what a game they and the home support were about to witness.

It was clear from the throw-in that these were two very well-matched sides with scores at a premium and effort and skill at a maximum. The 'Cilles' drew first blood with two points within the opening five minutes before Kian Campbell settled the home side’s nerves after 12 minutes with a fine point from play. Dean Carroll then levelled matters which was quickly followed by a trademark Kayden Plunkett goal after a fine team move found him close to goal, where he made no mistake with a bullet finish from 6 yards.

There were fascinating tussles all over the pitch, none more so that between Clonard’s tough as teak full forward Darragh Kirrane and the equally physical Cilles full back. Thomas Condon and Alan Hannon were winning plenty of clean ball in the half back line and delivering it superbly out the field as points were traded again before the half time whistle. Both teams headed for the dugouts on a scoreline of Clonard 1-3 St. Colmcilles 0-4.

The home side opened the second half scoring through Daniel Ward as he pushed his team’s lead out to three points. But the Clonard momentum didn’t continue as Cilles roared back to hit a goal and a point to retake the lead for the first time in the half.

But once again Clonard/Bracks responded positively and bravely as another lung bursting run by Dean Carroll saw him unleash a 20-yard strike with power past the despairing Cilles keeper. What a finish and his team were back in front by two.

The margin was then out to a goal as Daniel Johns clipped over a free which he had won himself. Kayden Plunkett and a Dean Carroll free added to their tally as they sandwiched scores either side of the seasiders seventh point of the evening. The scoreboard now read 2-7 to 1-7 in favour of Clonard.

Then came a crucial moment with 10 minutes remaining in what was an already enthralling game. Clonard’s full back Niall McHugh received a second yellow and got his marching orders as Cilles tails went up. The best player on the pitch thus far was out for the rest of the game after making an immense contribution.

But his teammates dug-in like no one thought possible, defending, tracking and tackling as if their lives depended on it. Shane Walsh-Oxley continued to mop up every breaking ball and his teammates Alan Hannon and Eoghan Monahan looked inspired in what was now a real battle. Cilles continued to push for the equalising goal as they threw everything at their opponents. Points were traded again at both ends as the tension and excitement mounted further.

Another blow for the home side, and more tension, saw Ballinabrackey’s Dean Carroll receive a black card and his team were down to 13 men as the clock entered injury time. Kian Campbell continued to win the aerial duals around the middle third as this game was almost over, or so we thought.

The tension was now palpable as the home side continued to thwart the seasiders every attack and with 7 minutes injury time elapsed their pressure was eventually rewarded with a penalty award as Eoghan Monahan seemed to do everything right until the foul inside the box gave Cilles a lifeline chance of extra time.

But considering the game thus far more drama was always likely, and sure enough a deserved piece of luck for the home side saw the unfortunate St. Colmcilles midfielder drag his penalty effort wide of the post, not reflective of the excellent game he had prior to it. The resultant kickout signalled the final whistle of a dramatic and absorbing encounter. The final score read Clonard/Bracks 2-8 St.Colmcilles 1-8. What a game.

The home side were through to the final as players from both teams dropped to the turf with emotions varying between elation, tiredness and dejection. What a game of football between two talented and committed sides as the home support went wild. This Under 15 team came of age tonight, boys became men. What a performance.